An empty court and bench are shown with no signage following the scheduled start time of Wednesday’s NBA playoff series. NBA players made their strongest statement yet against racial injustice Wednesday when the Milwaukee Bucks didn’t take the floor for their game against the Orlando Magic. 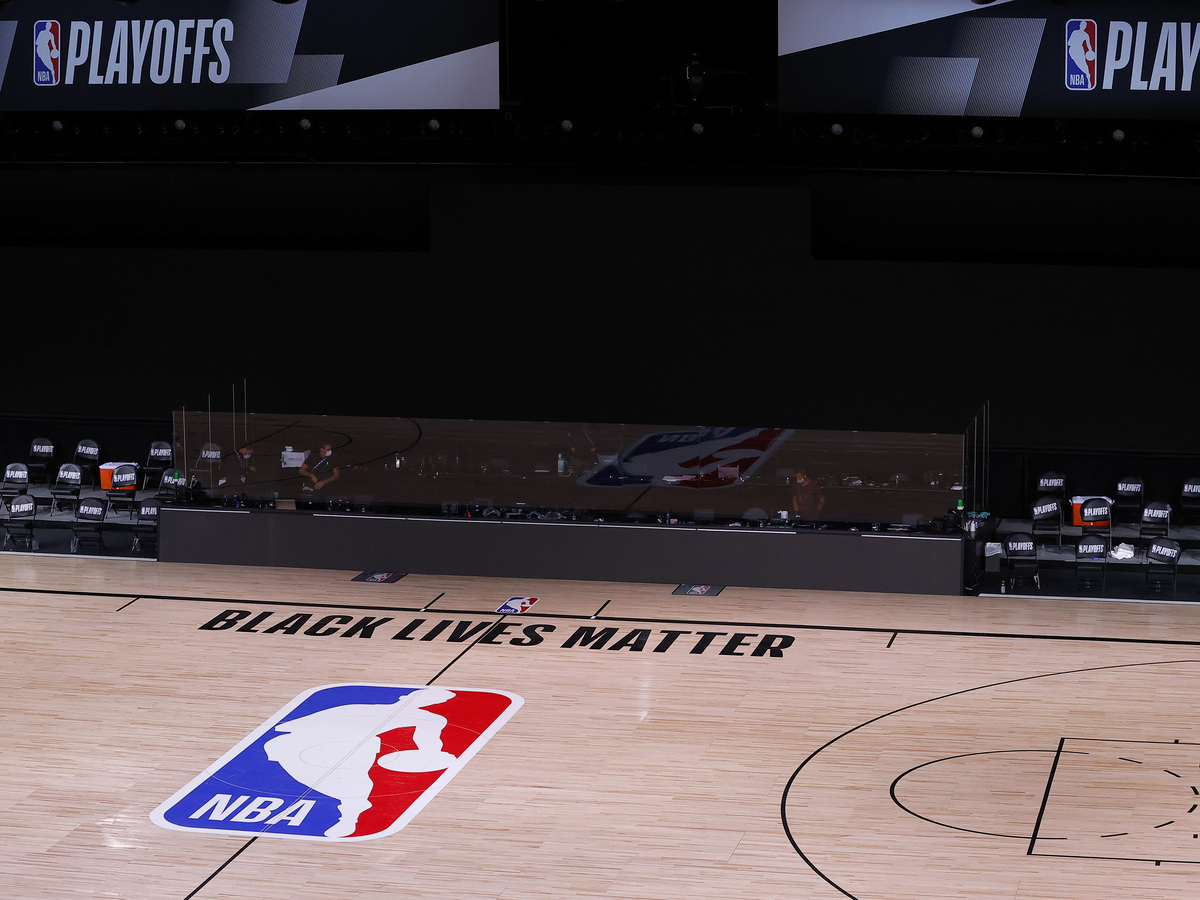 An empty court and bench are shown with no signage following the scheduled start time of Wednesday’s NBA playoff series. NBA players made their strongest statement yet against racial injustice Wednesday when the Milwaukee Bucks didn’t take the floor for their game against the Orlando Magic.

The NBA playoffs will resume.

But not before a second day of postponed games.

In a statement, the league said Thursday’s playoff games won’t be played as scheduled.

“We are hopeful to resume games either Friday or Saturday.”

The decision came after lengthy and sometimes angry discussions Wednesday night and Thursday morning, in which players debated the merits of starting back up versus cancelling the season entirely. Initially, two championship-contending teams, the Los Angeles Lakers, led by superstar LeBron James, and the L.A. Clippers and their star Kawhi Leonard, favored calling off the season, which restarted in July in a pandemic-protected bubble near Orlando, Fla. after being shut down in March because of the coronavirus outbreak.

But according to reports, the Lakers and Clippers realized the consensus among players and teams was to finish the season. And they agreed.

James was one of many players however, who made it clear the dramatic work stoppage that grabbed so much attention, was simply a start.

“Change doesn’t happen with just talk!!” James tweeted. “It happens with action and needs to happen NOW! For my @IPROMISESchool kids, kids and communities across the country, it’s on US to make a difference. Together. That’s why your vote is @morethanavote. #BlackLivesMatter.”

A video conference call meeting was scheduled for late Thursday between a group of players and team, league and union officials to discuss next steps in the player’s quest to affect social change.

The Milwaukee Bucks laid out their ideas for moving the issues forward, when they released a statement Wednesday following the decision to not play Game 5 of their playoff series against the Orlando Magic.

That decision prompted the NBA postponements that spread to other pro sports leagues, and continued Thursday.

The WNBA, a longtime leader in speaking out on social issues, postponed games for a second day in a row.

Several NFL teams called off practices and the league and its players union released a joint statement.

“We are proud that our players and clubs, League and Union, are taking time to have the difficult conversations about these issues that affect the Black community and other communities of color in America.”

The NFL’s Baltimore Ravens went even farther, with a forceful and detailed statement calling for action.

“Racism is embedded in the fabric of our nation’s foundation,” the statement read, “and is a blemish on our country’s history. If we are to change course and make our world a better place, we must face this problem head-on and act now to enact positive change.”

The Ravens called for a number of actions, including:

The National Hockey League was criticized for being the only major North American sports league not to postpone any games Wednesday night as part of the protest. But late Thursday, the NHL announced it was postponing playoff games that night and Friday, saying “we pledge to work to use our sport to influence positive change in society.”

And then there’s Major League Baseball.

Some players similarly criticized MLB, which traditionally has lagged behind other pro sports leagues when it comes to speaking out on social issues. Three games were postponed Wednesday as part of the Jacob Blake protest – but critics said it was an uneven response, with some teams playing and some not. And some players sitting out while their teams played. Thursday was the same – seven games postponed, eight played.

“Why is it so hard to do something unified for 1 day just 1 day?” St. Louis Cardinals pitcher Jack Flaherty tweeted.

Then late Thursday, MLB found itself embroiled in a protest-related controversy.

Video emerged of New York Mets General Manager Brodie Van Wagenen criticizing MLB Commissioner Rob Manfred for suggesting what appeared to be a protest publicity stunt. In the leaked video, Van Wagenen says it was Manfred’s idea to have the Mets and their Thursday opponents, the Miami Marlins, take the field as if they were going to play but then walk off together in protest. Then, they’d return an hour later to play.

“He just doesn’t get it,” Van Wagenen said of Manfred.

MLB responded to the story by releasing an apology….by Van Wagenen.

That may, or may not, quiet criticism of Manfred and MLB’s piecemeal approach in the current climate of protest. Baseball’s defenders will note the league has been dealing with a number of COVID-19 postponements that it’s trying to reschedule, and more postponements will further complicate an already difficult, truncated regular season.

Even though the Jacob Blake postponements are meant to transcend games and schedules.

In the end, perhaps a pitch perfect moment by the players will rescue MLB from its embarrassing incident.

In the Mets-Marlins game, players from both teams did take the field. But then they removed their hats, bowed their heads, and had a 42-second moment of silence, a day before baseball celebrates Jackie Robinson. Robinson wore number 42.

Then they laid a black, Black Lives Matter shirt on homeplate, and walked off.