FRISCO, Texas — As Dak Prescott looks out to his backyard these days, he can see the spoils of his success as the Dallas Cowboys‘ quarterback.

Growing up in Haughton, Louisiana, he would play football anywhere — the street, a sliver of land most likely without grass, a parking lot. He just wanted to play, and those spots sparked his love affair with football and helped build a work ethic that carries him to this day.

Now at age 27 and entering his fifth year with the Cowboys, Prescott can practice anywhere he wants in the finest facilities the NFL has to offer at The Star or in Southern California where he works with his personal coaches at 3DQB. So, what’s new? Prescott doesn’t even have to leave his house now.

In the spring, Prescott put in a 55-yard artificial turf field, including a 10-yard end zone, built by the same company the Cowboys used to install their fields at AT&T Stadium and The Star. Prescott’s D4K logo is stenciled into the field, as is the word “faith” in the end zone. A silhouette of Prescott pointing to the sky in tribute to his late mother, Peggy, makes up the “A.”

The backyard field was an idea he had a little more than a year ago but became more pressing in part because of the coronavirus pandemic and his contract stalemate with the organization.

It is now the quarterback’s home office of sorts.

“Just to be ready for training camp, not having to go somewhere else and trying to find a field and knowing people could be there filming and watching,” Prescott said. “I’m a guy that kinda likes to work in the dark, I guess you could say. Just come out and show what I’ve been doing. Just give me a sense of privacy, a sense of peace I can have the guys over there and get a lot of work in, still doing what I need to do.”

Prescott was not part of the Cowboys’ virtual offseason program, but he was still working out with teammates, sometimes at local high schools. In late June, the sessions with running backs, wide receivers and tight ends moved to his house not far from the Cowboys’ facility in Frisco.

Given Michael Gallup’s progression and rapport with Dak Prescott in the second half of 2019, Matthew Berry thinks that Amari Cooper is being drafted too high.

“That thing is pretty incredible,” Cowboys tight end Blake Jarwin said. “You see turf out there and it’s cool. We get to go out there and play in his backyard. He did a great job of getting us all together and making sure we were all working on stuff like that. He’s done a great job, especially not being here, I guess, in the offseason. He’s been locked in ever since he’s been here, and he’s been a leader for our offense since we got together.”

Prescott learned many of the subtle tweaks made to the Cowboys’ offense from his teammates who were in the meetings.

“I think we do the same thing we do here: Listen to Dak and run what he tells us to run and catch the ball,” Cowboys receiver Cedrick Wilson said.

CeeDee Lamb, the Cowboys’ 2020 first-round pick, credited part of his fast start in training camp to the workouts at Prescott’s house. Lamb had been wearing out the grass in his own yard working on footwork drills over and over before Prescott contacted him.

“It was actually like a surreal moment understanding that I play for the Dallas Cowboys now, and Dak Prescott actually texted me and asked me to come over and work with him,” Lamb said. “It was an unbelievable moment. I took it all in and I embraced it. I felt like now is my opportunity to show the guys just what I can do early on without pads on, just route running ability, small techniques and I can learn from those guys early.” 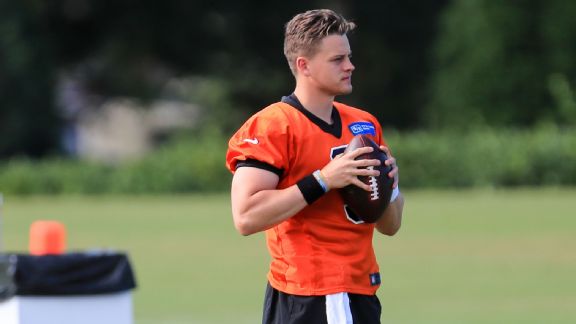 Lamb said he felt like “a little kid at the playground,” at Prescott’s house. In addition, the field is near a pool and a golf hole.

“We can all jump in the pool when we’re done with the workouts,” Cowboys receiver Michael Gallup said.

Since becoming the Cowboys’ quarterback in 2016, Prescott has taken his leadership role seriously, working out with players at every position group. Last summer, he picked up the expenses for teammates to join him for workouts outside San Diego, including a stay at the Fairmont Grand Del Mar (the same luxury hotel that hosted Los Angeles Lakers forward LeBron James‘ wedding).

“You’ve got to build chemistry. You want to get to know your guys. It’s been great to have them at my house, getting to know some of my friends, my brother, my family just a little bit better, I’d say, over the time,” Prescott said. “Then you just get to get out there without the distraction of anyone else. Whether it’s fans or whether it’s just other people like that.

“I think that’s where all that is created and it’s just created natural when you’re able to do it in those type of settings while still working.”