Mike Belmont, the manager at the Saxon Woods Golf Course in Scarsdale, talks about the precautions on the course.

No decision yet made on delaying opening of Rye Playland, county pools.

WHITE PLAINS – Westchester County-run parks and six public golf courses remain open even as the effort to slow the coronavirus outbreak has stopped most other commerce and recreation in the region.

“We believe that people do need recreation right now,” County Executive George Latimer said in a Wednesday briefing from his office. “They’re in their homes, they’re not working, they’re not doing other things, they should be able to go outside. That is what our park system is for as long as you do it intelligently and appropriately.”

But whether residents have been following social distancing guidelines has been a question at parks like Kensico Dam Plaza, which was bustling with people during recent days of unseasonably warm weather. Some have also wondered why the county’s golf courses remain open while private clubs have closed. 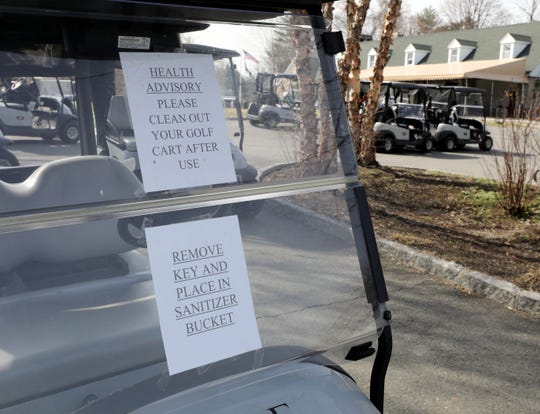 NYC: White House tells visitors to isolate but the governor was just there

“The pushback that people have when they see people on the golf course does not reflect the nature of the sport itself,” Latimer said.

In addition to its recreational parks and trails, Westchester owns Rye Playland amusement park and beach, and several pools. The opening of those properties has not yet been delayed or postponed, but Latimer said he planned to make a decision whether to push back Playland’s May 9 opening day.

The executive said Westchester will assess “where on the bell curve” Westchester is in terms of an expected surge of illnesses brought on by the disease COVID-19. The county had 4,691 confirmed cases of the coronavirus as of Wednesday, according to New York state.

It’s likely the county would push back the Playland opening to Memorial Day weekend, then decide whether to delay it again. Pools are expected to open in June after what is usually the close of the academic school year.

The county has been working with the state to increase hospital capacity as the number of confirmed cases increases, and Westchester’s Glen Island Park in New Rochelle is being used as a drive through testing site.

Latimer has floated the possibility that Playland’s massive parking lot could also be used for testing or other emergency efforts.